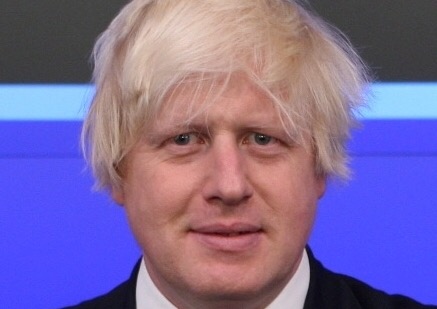 The debate about whether or not Britain should leave the EU (or Brexit, if you want to be cringey about it) has got me seriously considering whether it’s really in our best interests to allow everyone over the age of 18 to vote on the matter.

Most people I know seem woefully ill-equipped to cast a vote on an issue that will have huge social, political and economic ramifications. They know next to nothing about politics and even less about the European Union and what membership of it involves. In the coming months some of them will read around the subject, consider the pro arguments, consider the con arguments and then come to an informed decision. Some of them won’t bother. But most will still vote.

They will be swayed by the media. Be it the Guardian, Loose Women or even Facebook. And they will be influenced by the politicians and celebrities wading into the debate with their passionate and compelling arguments as to why Britain will thrive and all but take over the world if we exit the EU. Or wither away and probably sink into the sea if we dare to go it alone, depending on which camp they are in.

Which brings me to Boris Johnson. Just after he’d made his statement announcing that he would be backing the exit campaign a friend of mine who has very little interest in anything political said to me, ‘I bloomin’ LOVE Boris Johnson’. Yes. LOVE. Usually a politician counts themselves lucky if they are tolerated. Then on Friday night whilst watching Gogglebox I was aghast to hear the hilarious, orange one say the same thing! She loves Boris too. And what’s worse – she trusts him!

I am certain no other politician could compel my friend or the hilarious orange one from Gogglebox to declare feelings of love. Only Boris.

Good old Boris. Or Bojo, if you prefer. Seemingly bumbling through life on his trusty bicycle, his hair flapping in the wind as he rides through London amongst the people that elected him to be their mayor. Most of whom he should probably have offended one way or another over the years, with his pro-hunting, anti-gay marriage, racist, elitist ramblings.

Except the man seems to be unable to offend because with hair that ridiculous how can anything he says be taken seriously anyway? But it is serious. Politics is serious. The decision on whether or not Britian should be in the EU is serious. And Boris isn’t actually bumbling through life at all. He’s just trying to make it appear that way. It’s part of his brand.

His brand that has become so popular it’s almost as if he is exempt from the standards by which all other politicians are judged. He has shown disdain for homosexuals, for black people, for working class people, for Muslims -basically for anyone that isn’t the same as him – and yet he was still elected to be London Mayor. How the hell did that happen? 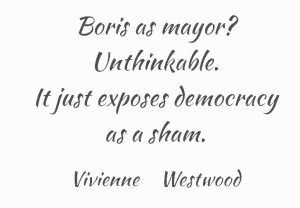 It happened because for some reason, people seem to think that when Boris is bigoted or prejudiced it’s just because he’s quirky. He is just making a stand against that old chestnut ‘political correctness gone mad’.

That should be applauded shouldn’t it?

Oh wait, what he really thinks is racist?

Owen Jones hit the nail on the head when he said “At the moment if Boris Johnson ran naked smothered in honey down Whitehall – people would go LOL Boris Johnson what a legend”. Utterly disturbing imagery, I know (why honey, Owen? So sticky…) but he’s right.

Boris tapped into a gap in the market for ridiculous, humorous, unkempt looking politicians and ran with it, appearing on programmes like Have I Got News For You and the Jonathan Ross Show to cement his ‘hey, I’m just here to have a laugh’ image and simultaneously peddle his ridiculous views. He actually said that bicycle helmets make no difference to cyclists if they are involved in road traffic accidents on one of those shows. What an idiotic thing to say. Why would he say that? Because it was of benefit to his career, that’s why. The man’s a self-serving imbecile. But a self-serving imbecile with a following.

And I admit, it’s often hard not to smile at some of his more trivial utterances and his posh, cheeky chappy sound-bites. But that’s all they are. Sound-bites. To reel us in.

He has cultivated this image of a say-it-how-it-is, no nonsense, loveable fool and gained a huge following of people who know next to nothing about politics but will vote for Boris because ‘he’s a legend’. They like him. They trust him. And now they will vote to leave the EU because he says we should.  And that is dangerous. Not least because Boris’ reasons for believing Britain should leave the EU seem to be unclear and are probably motivated by his own political ambitions.

Of course Boris isn’t the only high profile figure campaigning in this debate, but he is the most dangerous in my opinion. His title of politician affords him an automatic gravitas that he doesn’t deserve. He’s seen as a “legend” in today’s overused sense of the word, yes, but also an elected MP, so he must know what he’s talking about, right?

Even if he does (which I doubt) what makes people so willing to believe he has their best interests at heart? Why do they trust him? It’s no surprise that Boris ended up in politics. Yet another self-entitled, ex- Etonian, ex- Bullingdon Club, elitist to grace the Tory Party.

Usually such figures (and there are plenty to choose from) just don’t appeal to the average voter and why should they? They’re from another world. But Boris’ apparent likeability (which quite honestly, I can’t fathom) somehow masks all of the characteristics many would usually find pretty loathsome and gives him the added bonus of seeming trustworthy.

I don’t believe Boris has a clue what’s best for Britain in terms of the EU, or most other issues for that matter. That’s not to say he is stupid. To create and promote ‘Brand Boris’ took intelligence and guile and it has paid off. But even if we give him the benefit of the doubt and assume he has got a clue, let’s not be fooled into thinking that he cares about anything other than his own career or that he had the interests of the Great British public in mind when he announced that he would be standing firmly in the exit camp.

And it’s all such a shame for democracy. Yes, I understand that we should all have a say. No, I don’t have a better system to present to you. But can we really be totally comfortable knowing that there are potentially millions of people who know nothing at all about the EU and will be voting on Britain’s future based on the fact that they like Boris and his hair? So far it seems that his statement has made no difference to the polls but one eccentric, well publicised outburst from Boris and all that could change.

Just because you like Boris (and his hair) doesn’t mean he likes you. Or cares about you. He only cares about himself and people just like him. He’s fooling you.

And that’s why he’s so dangerous.